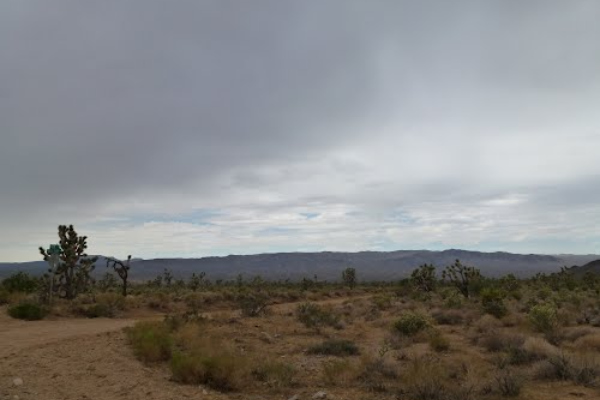 After recovering from yesterday’s 500 Mile celebration, I ran a little further along this lonely stretch of the A2B Route.

About 3 miles into the run, I passed by the Meadview RV Park.  The nice thing about this isolated park is that the view of the stars at night is spectacular!  The down side is that the water is trucked in. So campers have to use water very sparingly!!

The next 4 miles saw desert, desert, and more desert.

The run ended on the very south tip of Meadview, Arizona.  Interesting Note: The city of Meadview received its name because of its proximity to Lake Mead.  However, there is a large ridge between the city and the lake. So despite the city name, no one living in Meadview actually has a view of Lake Mead.

The Run:
After playing a few rounds of tag with the snooze button, I had less time than normal to prepare for today’s run. Most of the delay was absorbed by an abbreviated stretch routine and a very quick shower afterwards.

In spite of the rush, the run started very well! I took off faster than normal and quickly fell into an energetic, fun stride. I had woken up with a bit of anxiety. And I was excited to battle it with endorphins!

About a third of the way through today’s course, I realized that the morning temperatures were rising faster than normal.  The result was that I had on too many layers.  Not wanting to overheat, I took off one of my t-shirts, rolled it up, and threw it behind a bush in front of a dentist office.  (I would stop by later to retrieve it on the way to work.)

I was very surprised (and a little scared) when a car suddenly slowed down and moved very close to me as I ran on the side of the road.   After rolling down his window, the driver asked for directions to the nearest Dunkin Donuts. I laughed and gave him quick directions.  He thanked me and offered to buy me a cup o’ joe if I happened to be running that way.  I did go by the store a few minutes later. But I just waved as I ran by.

I was glad that I got my run in! It felt great!  But I chided myself for sleeping in a little too much.  Oversleeping means that something (or some things) have to get cut or truncated.  Best to avoid that habit!

The Mind:
While out running, my thoughts were initially about the workday ahead.  Thursdays are typically wall-to-wall insanely busy and crazy.  Today would certainly be no different.  The difference is that I have my annual review at work. Judgment day! (cue dreadful, ominous music, “Ta Ta Taaa!”)

While this is the source of some mild anxiety, I am really not that worried about it.  I know what I am good at and where I add value to my organization.  Likewise, I know where I have to leverage the strengths of others.

Although a little nervous, I am genuinely interested in what my manager and others see in me.  I am curious to learn what they think my strengths are and are not. I am eager for honest feedback, both positive and negative.

While some criticism can be hard on the ego, I believe that continuous feedback is essential for growth.  This is why I love people who are honest, immediate, and sincere with their thoughts or comments.  I really appreciate when it is given in the spirit of helping me to do or be better.  Generally speaking, I am surrounded by good people like this, both in my professional life and my personal life.

By the time my run was complete, I was looking ahead to my day from a completely positive perspective.  I was excited to get my growth day started and press forward.

How do you respond to feedback and criticism?”   Let us know at:
Facebook: http://www.facebook.com/A2BRun
Twitter: https://twitter.com/RunA2B
Email: a2b@sub4minds.com
Or in the comments section below.