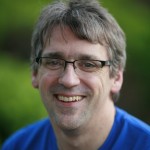 My name is Daryl O’Bryant. I come from a running family. Most of my brothers and my sister all ran track and/or cross country.  Some were able to use running as the means for a college education.  Running was a common, everyday kind of thing in our home.

When I was a teenager, my father announced that he was going to do a virtual run across the United States. We all thought it was kind of cool, different, and exciting. None of us ever doubted that it was doable. Still, this was quite an undertaking. Much more so in the days before Google, the internet, or any other technology. Armed with a road atlas, paper, pencil, and a ruler, my Dad created a log and hit the road.  On any given day, he could tell you his current location, a little bit of the geography, and upcoming milestone destinations.

Fast forward to 2005, when a fall from my roof left me with a broken neck (three fractures on C3 and C4) and a broken wrist. Sometime after the accident I found myself at a playground with my family. I watched children running and playing.  I heard the happy sounds of their unrestrained excitement.  In that moment, I understood the source of their happiness and laughter.  The children on the playground found sheer joy in just running, jumping, sliding . . . . The simple act of movement made them happy. I realized that Movement Is Life!

I began running again.  Very slowly at first. I began to set and achieve mild running goals.  As time went on I began to set higher and somewhat more aggressive goals.

Then, in the summer of 2011, I was in a car accident.  My second night in ICU,  I was lying awake and thinking about the next few months of my life and what I would get to experience.  While tethered to that hospital bed, I remembered the lesson learned at that playground 6 years earlier.  I made the firm decision that I would not sit and wait for recovery to happen.  I would be proactive in helping my body to mend itself.  At the same, I would respect my body’s need to rest and recover. But I would be moving! And living!

I set cautious, but assertive goals at first.  I used this time to listen to my body, being sure to give it room to heal itself.  Slowly, as I regained my strength (and at my doctor’s encouragement) I set higher goals.  Within 5 months of the accident, I had surpassed  my pre-accident Personal Best’s!

I began to realize that, with a little focus, hard work, and determination, I am capable to do much more than I had ever imagined.  With that latest bit of self-discovery fresh in my mind, I started looking for a fun new BIG goal.  Somewhere in the search, I remembered my father’s great coast-to-coast run.