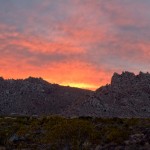 Today’s run on the A2B Journey ended on the northern edge of the Mojave National Preserve and ¾ miles from the 300 mile mark.  Originally, I had anticipated that the run the through the preserve would be uneventful and only mildly interesting.  I could not have been more wrong!  Not only are there some amazing natural sites and wonders, but there is also a tremendous amount of history.  My notes in this blog barely scratch the surface of the countless finds in the park.  While the A2B Run is a virtual run, I have discovered so many places and activities here that I would love to one day actually experience!  (Honestly, that can be said of so many of the places that I have ‘run’ in these first 57 legs!)

The Run:
At best, todays run could be called quirky.  Because of stormy weather, I have not been able to run for several days.  It looked like I might have a small window of opportunity this morning. I quickly covered all of the necessary stretches.  Because of the amount of time since my last run, I planned an easy run.

As I began to run, everything felt out of sync.  Oddly, my pace kept moving slightly ahead of some of the songs on my “normal pace” playlist. (This playlist is made up of music where the tempo is roughly 90 beats per minute give or take 1-2 beats per minute.)  I kept having to skip through the playlist until I found songs that are on the high end of the tempo range.  Finally, I switched to a faster playlist.  Looking back, I probably should have just turned the music off all together. But, it never occurred to me at the time.

Even with the faster music, my legs, arms, and breathing never found a common rhythm at any time during the run.  But I was happy with my time.  Not quite a Personal Best, but close!!

The Mind:
While part of my thoughts were focused on off-tempo running,  the rest of my mind thought about the recent massacre in Colorado. It weighed heavy.  It raises a lot of questions in my heart and mind.  Moments like this can shake my faith in human kind.

As I started my run this morning, my head was full of “Why would someone do this?” types of questions.   I am not sure that there are any answers to questions like that. Not satisfactory answers, at least.

But then my mind turned to a different set of questions about fight or flight.  With a theater full of people and one gun man, how many people reacted on the fight side the coin?

I know that crowd reactions in hostile situations are different than when it is a smaller ratio, like one-on-one.  In crowds, the tendency is that people will wait, thinking that certainly someone else will do something, which of course leads to everyone doing nothing.  But in this case, waiting and doing nothing is dangerous.  Not only to the individual, but to the entire crowd. Each second of hesitation is more perilous than the previous one.

I have read a few stories of heroism where one person shielded another.  I also read an account of one witness that said the gun man was 5-6 feet away from where he was crouching.  I was left to wonder if anyone chose to fight.  It is still too early to tell.  It is possible some of the victims or others may have tried to engage in fight.

I know it is easy to question and analyze after the fact.  And I know that everything in Colorado happened and ended very quickly.  There was no time to think, only react.

So my next question was this.  Is ‘Fight or Flight’ a choice or reaction?  As I think about it, it occurs to me that it could be both.  In the moment, it is pure reaction.  But I think that the reaction is likely an indication of earlier choices or a lack of earlier choices.  For example, a parent whose reaction was to protect his/her child has probably already devoted a few moments, or even seconds, of thought to “what would I do if my child was in danger”.  At that moment, the choice is made.

I suppose the old adage is true. The best choices really are the ones made ahead of time.

So if I have to make the choice right now, how would I choose?  Assuming that my kids are safe, I choose to fight. Not for some outward, heroic, “Yay me” reason, but rather for a very personal (and perhaps selfish) one.  Regardless of how it might play out, I want the outcome to be on MY terms, not the monstrous thug’s terms.  I would be content knowing that I acted, that I moved.

I would be interested in your thoughts about “Fight or Flight.”  If you have any insights or opinions, feel free to share either by leaving a comment below or sending an email to a2b@sub4minds.com .