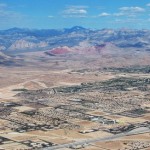 Today’s leg of the A2B Journey continued through southwest Las Vegas.   I ran through the part of town where good friend Corey Barker used to live before joining the Silicon Valley elite!  I also ran past the Rhodes Ranch golf course community. The lush green of the fairways really stands out against the red desert.

The Run:
I recently received an invitation to join a group of runners on an evening trail run.  Even though I am hesitant to run on trails, I enjoy running with this particular group.  They are a very fun crowd.  More importantly, they have the same general approach to running and training that I do.

Knowing that this run would affect my bodily differently, I arrived early to get some good stretching in.  As I and others gathered to prepare for the run, the host gave some instructions about the six mile course and answered questions.

After each loop, the group stopped to wait for all members of the running party to return to the main trail. Once everyone was accounted for (and rested), we began the next leg.

Normally, I would not like the start / stop approach.  However, in this case, it was good for two reasons.  First, with the inherent risk of trail running, it was a good way make sure that everyone was safe and to provide a timely response should there be a problem.  Second, it gave members of the group a chance check on and encourage each other.

It had been over three years since I had done a trail run.  There was so much that I had forgotten.  It was interesting and fun to rediscover.  Parts of the trail were smooth and soft.  Other parts hard and jagged.  There was mud and standing water.  On top of all of that, there was the continuous up and down.  The ever-changing terrain and conditions of trail running offer a completely different set of challenges than road running, both physically and mentally.

One of the loops had a steep ¾ mile long climb, followed by an even steeper ½ mile descent back to the main trail. It was hard and intense.  I loved it!

By the end of the run, I was very tired.  Running on the trail had pounded my body much differently than the road running that I am accustomed to. Even so, I enjoyed the run. I am looking forward to challenging that trail again.

Perhaps next time, I will plan something extra for the post-run recovery.  Maybe something like an Epsom salt bath, or a massage therapist, or some chill time in the hot tub!

The Mind:
Before starting the run, one of my friends mentioned that she loves doing trail runs because it takes her mind off everything.  It turns out that she is absolutely right!  While running on the trail, my mind was very focused on where and how my feet were going to hit the ground.  The terrain could be deceptive and tricky.  I had to remember to lift my knees higher to prevent tripping over roots and rocks.  Maintaining stride and pace almost had no application.

Since the trails are narrow most of the time, the group ran in single file.  As a result, I had to pay attention for opportunities to pass other runners when needed or to make room for other runners to pass me.  Another element of open trail running is being aware of trail/mountain bikes.  For safety’s sake, the bikes have the right of way. Usually, the bikers are moving pretty fast.  Therefore, when a bike is coming, you quickly move out of the way, even if it means stopping and stepping off the trail for a few seconds. It is much easier for you to stop, than for them.

So, my friend was right about trail running taking your mind off everything. The entire time I was running, my mind was very actively not thinking about anything else.  She was also right when she guessed that I would enjoy that part of it, but for different reasons than anticipated.  I liked it because for the time that I was running, I had to be completely present mentally.  Allowing my mind to wander was not an option.

On a different note, while pausing at the end of one of the loops, it occurred to me that this really was a “group” run.  From time to time, the entire group stopped to check on the safety and well-being of its members. Accordingly, they saw to the specific needs of individuals.

As we made our way, I saw runners sharing water with those that had either run out or did not know to bring water.  Several times, I noticed that a normally “faster” runner would run the next leg with a fellow runner who may not have been feeling well or was otherwise struggling.

While on the trail, runners would shout out loud to give information or warning to other runners about something coming up, such as a bike, standing water, or a fork in the trail.

I did not expect any of this.  I enjoyed and learned a lot from the natural trail running etiquette and keeping of each other. On one hand, it made me think of how to come better prepared to contribute next time.  On the other hand, it was a nice reminder to apply the same principle more fully in the other facets of my life.