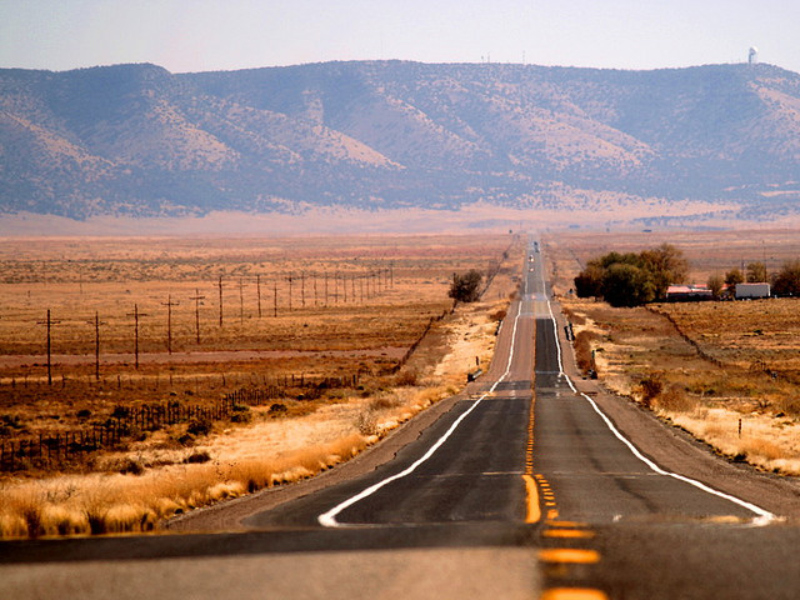 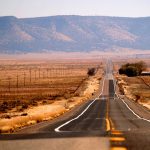 Today’s long run continued down Route 66.  This part of the Mother Road slowly rolls for about 25 miles into Seligman, Arizona.

A couple of interesting facts about the caverns. First, air comes into the caverns from the Grand Canyon through 60 miles of limestone caves, a fact discovered when red smoke flares were ignited in the caves, and two weeks later, red smoke was seen protruding from vents, near Supai, AZ, in the Grand Canyon!!

Next, Grand Canyon Caverns is not simply an Historic Route 66 roadside tourist attraction.  It is also the location of ongoing scientific work related not only to cave exploration, but to space exploration. A cosmic ray telescope was installed in 1979 under 126 feet (38 m) of solid limestone by the Department of Physics and Astronomy of the University of New Mexico. The purpose of the telescope is to study interstellar cosmic rays that constantly bombard the earth from deep space, penetrating solid rock.

With about 20 miles to go before reaching Seligman, AZ.  The next few runs should be scenic and lonely.

The Run:
I set out to run 8 miles this morning.  However, wanderlust got the best of me.

At about mile 4, I was about to turn off a main road onto some neighborhood roads when I saw a flashing red light about a quarter mile or so up the main road.  I recalled that someone had told me that turning left there leads through some apple orchards.  I guessed that at some point, the road would reconnect me with my planned route for the morning.

Even though the impromptu change added 2 miles to my run, it was worth it.  The scenery was beautiful!

The long run with extra miles required extra time for cool down and post run stretching.

The Mind (Thoughts While Running):
Last night, I came across an old notebook from a Shakespeare class that I took in college. I had fun reading the quotes, observations, and notes. They reminded me of how much I loved that class. Our teacher seemed gifted at making Shakespeare’s works come to life.

As I turned the pages, I stumbled across a quote from Julius Caesar. Even though it was written in my own hand, it was as if I was reading it for the first time. It struck me rather profoundly.  I found myself thinking about it for the rest of the evening.

“Now bid me run,
And I will strive with things impossible;”
– Julius Caesar, Act 2, Scene 1

This morning before my run, I read through part of the scene (both before and after the quote) to better understand the context.

In this epic tragedy, Ligarius speaks these words in bold (and blind) commitment to Brutus. Ligarius brazenly states that he will follow Brutus in “Any exploit worthy the name of honour.”

On my run, I thought about what Ligarius’ famous quip means in my own personal context.

To me, A2B is more than a cross-country run. My ultimate vision is that A2B will drive people and organizations worldwide to achieve new heights in health, happiness, and accomplishment. I have a set of significant milestones and end goals that serve as A2B’s success standards.  They also stand as beacons to keep me focused and motivated as I endeavor.

While I have clear milestones and goals, the path is not clear.   And for me, this is the impossible part. This is the part that can haunt my days with discouragement and fill my nights with sleepless worry. There are, indeed, moments when the entire vision seems completely impossible.

One of the reasons that the quote is so meaningful is that running is the elemental factor in the Ligarius formula. It is on my morning runs where I rekindle faded embers buried in the ash. Usually by the end of the run, the re-ignited fire in my mind (fueled by endorphins and huge gulps of oxygen) has burned away most of any of the onset of discouragement. This then allows me to strive more fully without distraction.

Towards the end of my run, I pondered ”things impossible.” For a word that implies an absolute, “impossible” really is a mostly subjective term. History offers a continuous stream of impossibilities that soon became someone’s foolish idea that, with persistence, became reality. Quite often, I think that the impossibilities are really limits created by chosen beliefs.

With that, I thought about one of my favorite lines from an earlier post. It says, ”I believe in redefining my impossible.” I love this line because it reminds me that I always have a choice.

By the end of my run, Shakespeare’s accidental motivation for runners was firmly etched into my library of thought. It is now readily available for quick retrieval whenever I need an extra push. Good run!

How do you strive with things impossible? We’d love to hear your thoughts.
Facebook: http://www.facebook.com/A2BRun
Twitter: https://twitter.com/A2BRun
Email: a2b@sub4minds.com
Or in the comments section below.