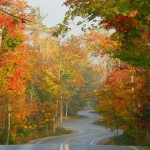 I have a small cold. So I am taking a couple of days off to let my body focus on getting better.

I want to share a running experience that has stuck with me for more than 30 years.

I ran my first half marathon when I was 14 years old.

It happened because my friend, Chuck, and I decided that we wanted to do something big and fun that no one else in our school was doing.  A half marathon fit the bill.

We found a race not too far away in North Georgia. Then, we began our “training.”  To a couple of 14 year old boys, training for a half marathon meant running a lot. And by “a lot,” I mean a LOT!  After our normal junior high school cross country practice, Chuck and I would get together and run even more! Before long, we were logging 60-75 miles a week.

Finally, the day of the race arrived.  After waking up early, my Dad drove us out to the race start.  I remember that we watched the sun rise as we made our way there.  We drove through countryside that was so stunningly picturesque that I was almost certain that it had not existed until that morning. Otherwise, I would have known about a place that was so beautiful.  I was excited that I would get to run in a place like this.

After getting our race packets, we pinned on our race numbers, stretched, and made our way to the starting line.  Soon, the starting shot was fired.  And there we were, running our first half marathon.

We soon discovered something that we had not experienced in any of our previous 5k and 10k races.  The people running this race were very friendly!  Each and every time we passed someone, or someone passed us, there was a short conversation that involved introductions, the weather, where we are all from, and/or the race itself. Always somewhere in the brief exchange, there were a few “check up on each other” questions, like “You boys doing alright?”  Or comments such as, “Make sure to drink some water at the water stations.”  We quickly became active participants in these mid-race chats.

As we approached mile 7, something happened.  Chuck had pulled a muscle.  We paused for a moment as he tried to stretch it out.  We started running again. But he was running slow and with a limp.  We talked for a while as we slowly made our way.  Other runners expressed their concern as they passed by.  They offered advice to take it slow and easy, to walk if needed.

At some point Chuck grew quiet. When I asked if his leg was hurting worst, he responded by telling me that I should return to race pace and finish the half marathon as intended.  I disagreed with the idea. But, he was very adamant that I should take off.  The main reason for my protest was that I did not think it was right to leave him out on the race course alone.  Chuck was quick to remind me that we were not alone in this race. There would always be people checking in on him (and me). He was right.  Reluctantly, I picked up my pace and returned to race speed.

Occasionally, someone would pass me.  Each time, I would hear a voice say, “Are you Daryl? Chuck said to say Hey! By the way, he is one tough kid!”  I was relieved to know that he was hanging in there.

I continued running, taking in the morning and the landscapes.

Finally, I reached the 12 mile mark.  Just a little more than a mile to go.

I remember thinking that in the previous weeks, I had run hundreds of miles. One more mile would be nothing.

Minutes ticked by. The road curved around back and forth. I was certain that at any minute, I would see the finish line or at least hear the post-race festivities.  But each time I turned a curve, there was only more road ahead.  I began wondering if the race organizers had mis-marked the course mileage.  I kept thinking that I should be there by now.  Time seemed to slowed down and anxiety increased.  The pavement between each curve suddenly seemed impossibly long.  I could see no other runners in front of me or behind me.  I felt alone. I grew more weary and discouraged seemingly with each step. I wasn’t sure that I could keep running.

This was my first acquaintance with “the wall.”

Finally, it occurred to me that on the other side of the finish line was my Dad.  I knew he was there, watching and waiting.  I focused on that thought.  I imagined him there.  I began re-playing that thought so loudly as to drown out any other distractions.

I don’t know how long I maintained that one thought.  At the time, to a 14 year old boy, it seemed forever.

Then I rounded one last curve.  And there it was. The finish line.  There, on the other side, was my Dad (just as I had pictured it). He was jumping up and down and waving his hands as if his fourth son was about to set some land speed record.

In a heartbeat, I began sprinting.  The anguish and fatigue had instantly evaporated. The heaviness in my legs was gone. They were suddenly light and strong.  Smiling, I raced across the finish line and celebrated with my father. Truly, an unforgettable moment.

After minute or two, Dad asked about Chuck.  I quickly told Dad what had happened. I then decided to go back and find Chuck.  I started running backwards through the race course. After about 1 ½ miles, I finally found him still fully-determined to finish the race running. And he did.

Chuck and I planned and trained hard for that race.  We both felt fully prepared as we started.  However, the race was bigger than each of us had imagined.  Yet, he and I both managed to overcome our unique challenges.  In the end, we both shared in a common, quiet celebration for those who finish the race.