Leg 55 – Running For A Surer Foundation 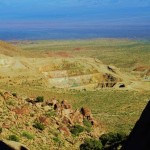 With just a few more miles remaining before leaving the Mojave National Preserve, today’s leg of the A2B Journey passed by the old Morning Star Mine.  This mine was originally active between 1927 and 1942. It was shut down when the War Production Board’s Order L-208 suspended all gold mining in the United States. This was done in order to focus all manpower and resources to the war effort. Decades later, it became a significant gold producer for the Vanderbilt Gold Corporation between 1988 and 1993.  Mining operations ceased as a result of environmental violations including bird and animal deaths in the cyanide ponds, and cyanide solution leaking into the adjacent drainage.

The Run:
I woke up feeling a little under the weather.  At first, I decided to pass on the run.  But then, I started looking ahead at my day.  I quickly changed my mind, thinking that I needed the run more than I needed the rest!

While stretching, I planned a nice, slow, and easy run.  I just needed enough to turn my heart rate up a few notches and to get a healthy dose of oxygen flowing through my brain and veins.  Also, a little shot of endorphins would be nice.  So I set out, taking it easy.  Still not feeling well.

In the 2nd mile, a small runner’s high prevailed over my nagging symptoms.  As I continued to run, I waited for the mild euphoria to fade.  Thankfully, it decided to linger.  As a result, I decided to gently up the ante and run at normal pace where I stayed for the rest of the run.

My slightly under the weather run turned out kind of nice!

The Mind:
In anticipation of my work day, I felt strongly that I needed my run to better prepare for the day’s expected challenges.  Running is the time where can focus, ponder, and just think.  I use this time in a variety of ways.

Today, I chose to think about several of the project meetings that I have today and the critical decisions that need to come out of those meetings.  I tried to anticipate the issues, arguments, and counter-arguments that are most likely to arise.  As a project manager, I reviewed where the hard lines are in my projects vs. where  we can be more accommodating.  Finally, I considered the impact that each possible outcome would have on those that are doing that actual work on the projects.

Having completed the run this morning, I stand on a surer foundation as I confront the storm of issues and challenges waiting for me later today. Plus I am more energized!