Leg 89 – The Audacity to Create 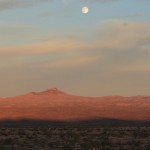 Leaving Rosie’s Den, the A2B route continued south on U.S. 93. For the next 6 miles, I enjoyed the quiet desert solitude. The wide and beautiful landscape stretched from the White Hills, to the east, all the way to the contrastingly named Black Mountains, off to the west.

The Run:
A late night last night cascaded into a late run this morning.  Feeling pretty lethargic, I was half-tempted to skip the run.  But remembering how I will feel afterwards, I got dressed in my running gear and stretched.

After the first few strides and deep breaths of cold air, I was already glad to be running.  Sometimes, I love the way just the movement of running feels.  My arms pumping back and forth.  My chest expanding as it fills with air. The muscles in my legs responding to each foot striking the ground.  Yes!

While I enjoyed a small dose of endorphins, I never reached what I would consider a real runner’s high.  Nevertheless, I thoroughly enjoyed today’s run.  I am thankful for the gift of movement!

The Mind:
During the run, I thought about part of an interview with Sir Richard Branson that I had read while stretching.

“Everybody who creates something is doing something audacious.”
– Sir Richard Branson

I genuinely believe that every person has it in them to create.  I see it in everyone I know, especially those that I love the most. Each one of my children. Each one of my family and friends. My co-workers. Everyone.

I think that every person, at various times, will have a thought, an idea, or something that is the seed to create something new and unique.  It happens so often we barely notice it.

I remember as a kid thinking that it would be great to have a machine that, on the fly, would take a blank piece of paper and put my homework on it in a way that was more legible than my poor penmanship, aka a desktop printer.

Another example was when I bought my first music CD. I remember my brother suggesting that it would be better to put music on a microchip, making it more portable.  That was long before iPods or mp3 players.

Recently, my daughter shared with me an idea for a new kind of cupcake that I think many people would love.

Just in the past few months, I have seen, heard, and witnessed the most wonderful and sometimes elegantly simple ideas.  From choreography to yard work. From mobile apps to musical theater.  From the practical to the bizarre.  The examples are endless. It amazes me what people can do and come up with.

I think the capacity to create is different for everyone.  For some, it is big and timeless, like Da Vinci, Shakespeare, or Guttenberg.  For others, it might be quiet and timeless, like within a home, a classroom, a business, or community.

But Sir Richard’s suggestion regarding audacity is what captured my attention.  What does it even mean to be audacious? And what drives it?

As I think about it, I believe that it means to be bold, courageous, or perhaps adventurous.  Undaunted is another word that comes to mind.  I like this definition.  I decide to not consider the more negative meanings that entered my thoughts.

As for the driver behind audaciousness, it varies.  I know, from experience and observation, that necessity can be the catalyst for action and audacity.  Mostly, however, I have seen people make a choice. They then let passion for that choice drive their boldness, courage, and focus. A fun process to follow.  Also fun to watch in others.

As I review examples in my mind, it occurs to me that audacity is rarely loud or dramatic.  This makes sense to me, as passion is driven from within.

In the context of creating, there is the added element of stick-to-it-iveness.  The desire, energy, focus, work, and endurance to see something through to completion is perhaps the best standard for audaciousness.

In the last few hundred yards of my run, I considered where I am on the “audacity scale” towards my goals. Being honest with myself, I did not like the answer at all.  So while I enjoyed the run itself, I ended it a little angry with myself, but determined to leverage the internal ire to something positive.  More to come on this . . . .