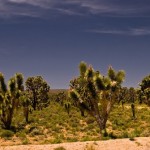 The A2B Route crested the Cima Summit just about two miles south of Cima, California.  The past 20 miles of the Journey ran alongside of a section of Union Pacific railroad track.  This road was originally created to support trains pulled by steam locomotives climbing the summit.

The Run:
Another early run! Yes! After yesterday’s run, I decided not to run a specific route.  Instead, I went on an exploring run in my still new neighborhood.  I wound through a series of side streets to a large park.  While running through the park, I followed a sign pointing to a greenway.  After about a mile on the greenway, I checked my watch and decided that I needed to start making my way back.  However, I made a mental note to explore the greenway more fully. Perhaps tomorrow . . . .

Trying to retrace my strides back home, I suddenly found myself in unfamiliar territory.  Also I had lost the sense of which direction I should be heading.  I decided to follow the general direction of the occasional passing car until I found a friendly landmark.  Along the way, I encountered a nice group of runners heading in the same direction. I enjoyed a brief chat with several of the runners.  Finally, I regained my bearings, bid farewell to my new friends, and headed home.

Though I lost my way a bit, I was happy to discover some new places to run.  And I met some nice people to run with again soon!

The Mind:
There is a lot to do today!  My daughter is coming to vist me for a few days. So my thoughts were all about what I need to do to get my place ready for her, what groceries to buy, things to do while she is here, etc.  As I think about it, I get excited (which explains why lost track of where I was).

I love the time I get spend with my kids.  I love hearing their voices as we talk about anything.  My favorite is hearing them laugh!! Just thinking about it makes me smile!