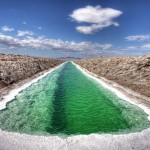 The A2B Route headed north through Amboy, California, directly towards the Mojave National Preserve.  While running up Amboy Road, the landscape suddenly revealed a snowy white area with crystal blue bodies of water. The white area is made up of crystallized formations of calcium chloride (table salt).  The bodies of water are salt evaporation ponds owned by the National Chloride Company of America.  The salt evaporation ponds are shallow man-made ponds designed to produce salt from a brine solution pumped from wells on the lake bed of Bristol Lake (a dry lake).  The water is drawn out through natural evaporation which allows the salt to be subsequently harvested.  It is estimated that there is still some 60 million tons of salt in reserve at this location.

Neat place!  It just goes to show that you never know what interesting things you’ll see and learn on a virtual coast to coast run!

The Run:
I did not get a lot of sleep last night.  So, there was the wrestle inside my head about whether to sleep in or just go run.  Past experience won the day, knowing that I’ll feel better if I run now and sleep sometime later (‘later’ as in next year or something).  Oddly, the run felt pretty good from the first stride! I knew right away that I had made the better choice!

It was another day of running down random roads just to see where it goes and what it passes by!  I had a few ‘Aha!’ moments as I connected the dots on the new neighborhood map in my mind!

The Mind:
While running, I turned my mind over to the mundane!  With the dust settling from vacations and a move, I set about the tedious tasks of planning budgets, bills, and the inevitable bottom line for the next few months.  Boring, right?  It was, sort of.  But I like being in control of the cash flow.  Plus, I build in rewards for myself to keep it interesting.  Like planning for the next few trips to visit family, run a race, etc.  This is important for me.  I want to always have something to look forward to.  So I create it and plan for it.