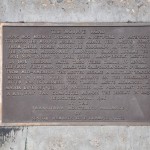 The A2B Journey crossed over the Mojave Road.  This historic road originated as a system of paths used by Native Americans to cross the Mojave Desert.  The pathways connected a series springs and other water sources. Later, missionaries, explorers, and pioneers used the trail to get to the Pacific Coast from the Colorado River.  Eventually, however, the road became less of an immigration trail and more of a supply route used by soldiers and freighters.

Today, the 138 mile road remains a lot like it was in the pioneer days.  It is open only to 4-wheel-drive vehicles.

The Run:
Awesome run this morning!  I knew at first stride that it was going to be a great and fast run.

I had woken up much earlier than normal and couldn’t go back to sleep.  So, I decided to go ahead and get started on my run.  Not in a hurry to get going, I enjoyed taking my time to stretch and drink water.  When it came time to start, I set my watch and started the music on my iPod.  The first song up was a live version of Billy Idol’s, “Eyes Without A Face.”  Right away, my legs and feet seemed to naturally click with the tempo and rhythm of the music.  For the first half of the run, I chose music that matched the pace of that first song.  Among my favorites were Rocket Summer’s, “Hold It Up” and jazz pianist, David Benoit’s version of “Linus and Lucy.”

At the halfway point of today’s route, I switched to a playlist with faster paced music.  I ended up keeping it there for the remainder of the run.

As I crossed my finish line, I was excited, though not surprised, to see a new Personal Record (PR)!  My new neighbors got to witness for the first time, Daryl fist pumping in the driveway.  (First, of many, I hope!!)

The Mind:
I knew right away that today’s run was going to be good.  Within the first half mile, I knew it was going to be fast.  (At least, fast for me.)  So rather than pondering on some distant thought, I decided to focus on setting a new PR.  I monitored my body and my running to make sure that everything stayed in sync and worked properly.  I love how this feels.  At these moments, there is clarity and focus.  Strength and energy.  I do not know how else to explain it.

As I pushed my way into the final half mile, I knew that I had my PR.  Oddly, just knowing it made me run harder.

As I completed my cool down, I thought it interesting how something that requires a lot of effort can completely rejuvenate you.  Physically, mentally, emotionally, and even spiritually.